No Fault Divorce Legislation to come into force on 6th April 2022!

PLEASE NOTE: THIS ARTICLE IS OVER 1 MONTH OLD 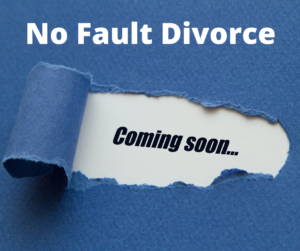 The long-awaited No Fault Divorce Legislation finally comes into force on the 6th of April 2022. Some would say that this is long overdue as it was initially proposed over 25 years ago!

What is a No Fault Divorce?

A No Fault Divorce will allow the Family Court to grant a divorce without the need for the Petitioner citing issues that caused the breakdown of the marriage such as adultery, unreasonable behaviour and desertion, removing the blame factor and allowing the parties to concentrate on the important matters, such as children and finances.

The Legislation introducing No-Fault Divorce also carries out extensive amendments to the existing divorce rules, and some changes in the terminology. When applying for a No Fault Divorce it is possible for either (or indeed both parties) to make the application to the court, and it also enables applications for both the Conditional Order (previously known as Decree Nisi) and the Final Order now known as the Divorce Order (previously known as the Decree Absolute) to be made by either party.

The legislation provides for a minimum timetable of 26 weeks from commencement of the divorce proceedings and the Final Divorce Order being made, although in reality most divorces will take longer.

The only ground for divorce is that the marriage has irretrievably broken down, this remains in place, but now  ‘No Fault Divorce’ replaces the previous reasons for divorce.

It is not possible to issue divorce proceedings until the parties have been married for 12 months, this rule remains in place and is not altered by the new legislation. The legislation also applies to same sex marriages and civil partnerships.

Divorce is dealt with almost exclusively online, and the new rules also sensibly include rules regarding service of proceedings via email.

Divorce is likely to be emotionally challenging for many couples going through the divorce process.  It is therefore welcomed that the new legislation now removes the necessity of divorcing on one of the “blame” reasons, where it is not practical to wait to divorce on the basis of 2 years separation.